We create and develop VR gaming interfaces that are laying the foundations of new interactive systems and patterns within VR. Our studio is a leader in VR with a deep foundation in mobile optimization techniques and solid knowledge in cross-play and cross-platform development.

Our efforts focus on the invention of the next disruptive gaming interfaces: revolutionizing the way one interacts, physically and emotionally, with evolving virtual universes.

We aim to lead by example, set industry standards, and help move VR forward and break into the mainstream. 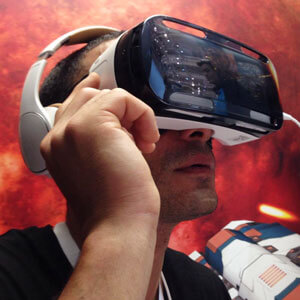 CEO
Local dictator, but can be nice and gentle when travelling or sleeping

Technical Director
The good, the bad and the ugly.

2D/3D Game Artist & Illustrator
Comfort zone… until the next challenge.

Game Programmer & Game Designer
Lunch hour is the best hour of the day.

2008: Foundation and focus on robotics to invent a computer that is fully controllable remotely through gestures.

2009: QB1, a new kind of personal computer able to track the user visually and to surround him/her with an interactive halo. Samsung and Logitech bought early versions of the QB1.

2010: Bookapp.com, a joint-venture to adapt existing practices based on printed documents to new reading interfaces.

2014: Anshar Wars and VRtillery for the Samsung Gear VR Innovator Edition Launch. We lay the foundations of an invention in terms of gameplay; consequently Anshar Wars is one of the games that received the most positive reviews.

2015: Anshar Wars 2 for the Samsung Gear VR Commercial Launch.
While most games are stationary, Anshar Wars 2 represents the pinnacle of phone-powered VR technology. It combines 360-degree movement, multiplayer, voice chat, and the ability to record screenshots and gameplay while playing.

2016: First Cross-Game Available on Gear VR and Rift. Samsung bundled its phones with Anshar Wars 2 amongst six VR games, which included popular titles such as EVE: Gunjack and Land’s End. Anshar Wars 2, renowned for its success on Samsung Gear VR, was made compatible with Oculus Rift, becoming the first cross-game and cross-buy ever available on both models.