OZWE Games has been named as ‘One to Watch’ in Europe in a list of business excellence published by the European Business Awards, one of the world’s largest and longest-running business competitions.

OZWE Games was chosen as it demonstrates exceptional achievement in one of the 18 European Business Awards’ categories and reflects the program’s core values of innovation, success, and ethics.

The ‘Ones to Watch’ for Switzerland can be found at on the European Business Awards website.

OZWE Games efforts’ focus on the invention of the next disruptive gaming interfaces: revolutionizing the way one interacts, physically and emotionally, with evolving virtual universes. Stephane Intissar, CEO of OZWE Games, said: “We aim to lead by example, set industry standards, and help move VR forward.

The companies chosen as ‘Ones to Watch’ are the most inspirational, successful and dynamic in Europe.

The talent and tenacity at the heart of these businesses create jobs and drives Europe’s prosperity. This ‘Ones to Watch’ list of excellence is a benchmark of success for the rest of the European business community.

Companies on the ‘Ones to Watch’ list come from all sectors; from manufacturing to retail, agriculture to technology, and all sizes; from start-ups to billion euro businesses.

OZWE Games will now have the chance to compete in one of the 18 categories of this year’s European Business Awards to become a National Winner in their country. If successful, they will then take part in the Gala Final in December 2019, where the final 18 European winners will be announced. 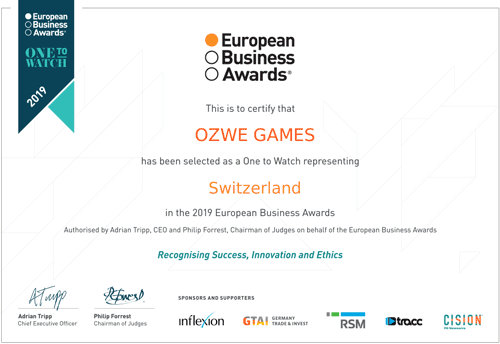 The Awards Categories for 2019:

The European Business Awards is now in its 12th year. Last year it considered over 111,000 businesses from 34 countries. Sponsors and partners include Inflexion, Germany Trade & Invest and PR Newswire.

For more information about this year’s European Business Awards please go to www.businessawardseurope.com.

Share This
We use cookies to ensure that we give you the best experience on our website. If you continue to use this site we will assume that you are happy with it.OkPrivacy policy