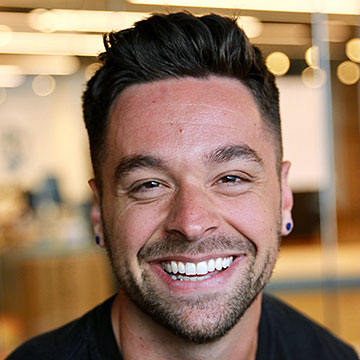 Tell us a bit about yourself.

Oh brother, I’m terrible at these ABOUT ME things, haha! Originally from a small midwestern town outside of Chicago, I’ve been living and working in Los Angeles for six years now. I have a three year old Siberian Husky named Zeus. He’s an absolute joy, and likes to lie on my feet while I’m writing. I’ve written books, screenplays, short stories, short films, comic books, video games–several of which have gone on to garner nominations, and to win awards, which is very exciting–and in truth, there isn’t much that I’ve not done. In my free time, you’ll find me playing with Zeus, reading a book, playing video games, or binge watching TV.

How to write a VR game story?

When Ozwe approached me several years ago to begin working on the sequel to their first space shooter, Anshar Wars, at the time it was the first video game I’d ever worked on. As an avid gamer myself, I leapt at the chance. The first thing I did was go to the Writer’s Guild Library, here in LA, and read several scripts from other video games to familiarize myself with style and logistics. The Ozwe team had a general idea for the story, but gave me quite a bit of creative freedom to develop characters, relationships, story plots, and all the things that make a story immersive, which is completely unique to VR games. Ironically enough, a story in VR plays out much like it would in any video game, but you have the added benefit of the player’s complete immersion in the universe and the game you’ve created, which I used to my advantage when developing intense scenes within the game.

Is there anything you found particularly challenging about writing for a VR game like Anshar Online? Are there differences between regular games?

Well, the challenge is always to write an engaging story for the player to experience. In the last few years we’ve seen some epic storytelling in the gaming industry–with high praised games like the newest installment of God of War, Red Dead Redemption, Spiderman–we’re seeing more and more how a great story can truly elevate gameplay. With Anshar Online, my main focus was to create a deeply engaging story with rich characters–and I would venture to say this is universal between all video game platforms, not just VR.

What does a writer do during a typical day at work? How does this change over the development cycle?

With a massive undertaking like Anshar Online, we broke the writing down into phases, beginning with creative. Previously, we had created such an expansive universe with Anshar Wars 2, and we loved the mythos and settings that we had the opportunity to develop in that game, so we wanted to explore other stories happening within the backdrop of the events that unfolded. Once I had a firm grasp of the characters, their relationships, and the overall scope of what we wanted to see–I drafted up, what essentially would be, a synopsis of the main plot points. When we had a story that we all loved, the real work began. In the next and largest phase, we tackled each story mission (dialogue, objectives, player actions, etc.) This phase lasted several, several months. And each sequential phase after found us tweaking things here and there, items, tutorials, and all the other fun things involved in gameplay.

To what extent did you contribute to the overall story as opposed to filling in the blanks? Did you have the opportunity to contribute ideas for quests, locations, characters?

I must say, I’m very lucky to have joined the team that I have. Ozwe gives me quite a bit of creative freedom, and though it is an extraordinary team effort, with some very talented people on board, they offer me a great deal of trust that I can deliver something special. But, as I said, it’s very much a team effort, and everyone has the opportunity to contribute their thoughts and ideas–and just like the film industry, diversity is the key to a successful game.

What is your preferred story/dialogue/mission?

I’ve always been a fan of both action and horror games. With something like Anshar Online, which is very much an action-focused space shooter, I get to play with the intense battle scenes and emotional consequences of each–which I absolutely love.

How does your time divide between writing original content and reviewing and editing content to make sure the whole thing hangs together?

Well, early in the game’s development it’s when most of the creative content (characters, setting, planets, etc.) came together. This gives the developers and the designers a basic starting point for the game’s look and feel, and allows them to create tone. Most of the reviewing and editing, although mostly an ongoing process almost from the start, becomes a great deal heavier the closer we get to completing the project. As we wrap up production, almost all of our time is spent reviewing, editing, and tweaking parts of the game to make everything cohesive.
Is it difficult finding work?

The great thing about what I do is that I’m not impartial to other areas, and by that I mean I don’t exclusively write for video games. I’m also involved in both the film and literary industries, so between everything, I’m kept very busy! Lol

What interactive stories have excited you recently, and what are you looking forward to?

With the release of the Oculus Quest in the near future, I’m very excited to see the new kind of content people will be releasing–and not just in video games. We’re looking at VR TV Shows, movies, Simulators–stuff we’ve never seen before. Can you imagine watching your favorite TV show, and being able to look and experience everything, not just what the camera captures, but EVERYTHING?! It’s going to be a very exciting time.

I guess the only thing left to say is keep an eye out for our next game!!