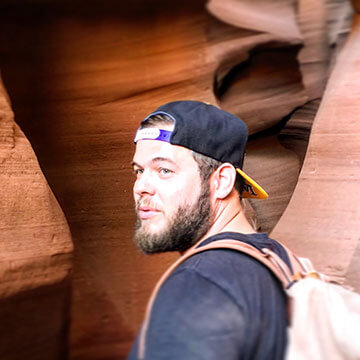 In 2014, he started working at OZWE Games and specialised in creating the visuals elements of Virtual Reality (VR) games. From concept art and storyboards to polishing and final art. An expert of Unity, Cinema 4D and Substance Painter exceptionally trained in hard surface, texturing, lighting and special effects.

The Art Within VR Games

Fabrice explains that VR adds another dimension to design, as we create games with stereoscopic vision, meaning that there are three spatial dimensions (width, height and depth). This is why VR is so unique, and sophisticated at the same time.

For Anshar Online, Fabrice created all the player spaceships, and he had to ensure good performance on all oculus platforms Samsung Gear VR (mobile VR), Oculus Go (standalone VR) and Oculus Rift (PC VR). In 3D modelling, the more optimised the meshes are, the more resources he can allocate for other visual elements.

VR models have to be much lower polycount than what we see in regular PC, console games or traditional mobile games. In PC VR we have to run at 90 fps (frames per second) and 60 to 72 fps in mobile VR. All assets are rendered twice, once for each eye. Only very few PC and console games run at 60 fps, and they have only one screen to render, whereas we have to render two eyes, at this minimum frequency, but on a mobile GPU.

Fabrice says that in general, he goes from difficult to simple, this is the reason why he first creates a high poly ship with all the details, and from there, multiple versions of each ship with fewer polygons, one model with 4,000 triangles for the player view and another lower model with 1,000 triangles for the other player in the game. Completing high poly assets requires many hours and much patience. 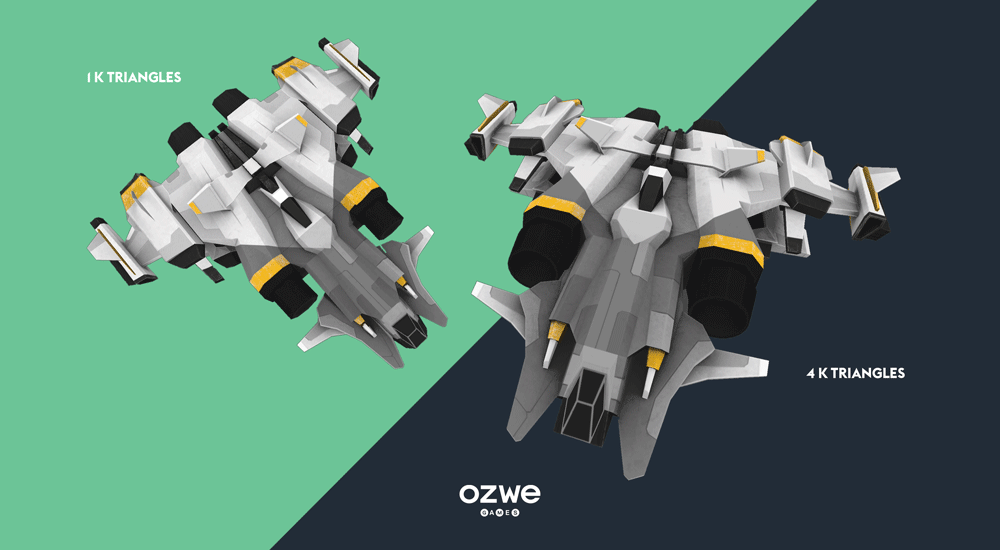 He relies more on texture details to win in polycount. He bakes light, ambient occlusion, metallic, roughness into the albedo and adds details in the normal map texture to increase performance in the game.

Details before and after baking inside the normal map.

In the film industry, they use multiple UV set for one mesh to have an excellent quality of details but in video games, and VR more specifically, most of the time we have to work with only one UV set per mesh. This means that he has to find tricks to make it look nice and high resolution.

One solution is to scale some part of the UV to get better resolution. For example, Fabrice scales up the section which will be directly seen in front of the camera of the player perspective view and another part which is underneath or not seen directly by the player scales down.

The lighting in mobile VR is quite complicated to use compared to other platforms. The phone can’t manage real light, volumetric light or shadows. Fabrice has to fake it; for instance, all the light in the game are baked directly in the texture.

For the volumetric light, Fabrice aims to make the players think it is a real volumetric light while in reality, he fakes it. He uses a quad and one texture with some sunbeam directly drawn on it. Then he animates directly with the shader thereby creating an illusion.

For the shadows, he has to export the whole level from Unity and open it in Cinema 4D, place the lights around the level. In this case, Fabrice bakes it in a second UV set and put it on top of the main texture.

Shadows before and after.

One of the most challenging parts of Fabrice work is the Visual Effects (VFX). He developed all the special abilities for each ship as well as all the VFX in-game like explosions, smokes, sparks and so forth.

The CPU and GPU of a phone (mobile VR) can’t deal with a large number of particles, so he had to fake it. For example, the spark that you can see in the game when someone gets hit by a laser looks like they are many particles, but it’s only one quad with animation on it.

You can watch all the special effects Area Repair, Backward Teleporter, Stun Field, Phasing Device and an EMP Blast on our Youtube channel: www.youtube.com/aospecialabilities