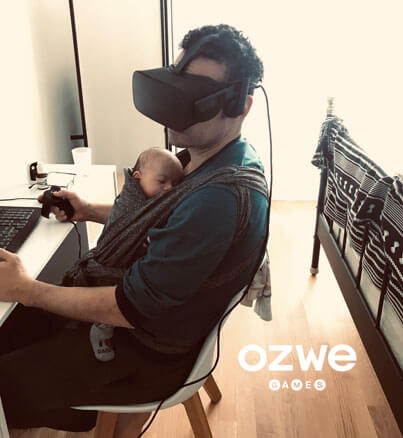 In 2013, Stéphane created the first version of Anshar Wars, an immersive version of the game Escape Velocity. That is how the success story began! The Oculus team (Facebook-owned) contacted him to discuss the possibility of a partnership.

In 2014, under his leadership, OZWE Games had fully embraced the development of virtual reality games. Since then, he has worked on 4 VR titles, including the popular series cross-play and cross-platform Anshar, offered in six languages.

And he was nominated “Innovator of The Month” for March 2017 by Innovation Forum Lausanne.

Stéphane is the proud dad of a little boy. In his spare time, he loves walking with his dog Basil (OZWE’s official mascot) and playing basketball. Also, he likes tasting wines together with colleagues, friends, and family.